At least 137 people were killed and thousands injured in a massive explosion at the port in Beirut, ravaging the heart of the city’s vibrant downtown business district. Here’s what we know so far.

What happened in Beirut?

A giant explosion at a warehouse in the port sent a shock wave through downtown Beirut at about 6 p.m. local time on Tuesday. Videos of the blast posted on social media showed smoke billowing from the warehouse on the waterfront before a massive explosion produced a dome-shaped cloud that engulfed that section of the city center. The force of the blast did tremendous damage to the surrounding neighborhoods and nearby buildings, tearing off balconies and shattering windows. It blanketed the city in debris and ash for miles around.

Beirut was rocked by an explosion felt as far as 150 miles away in Cyprus on Tuesday. 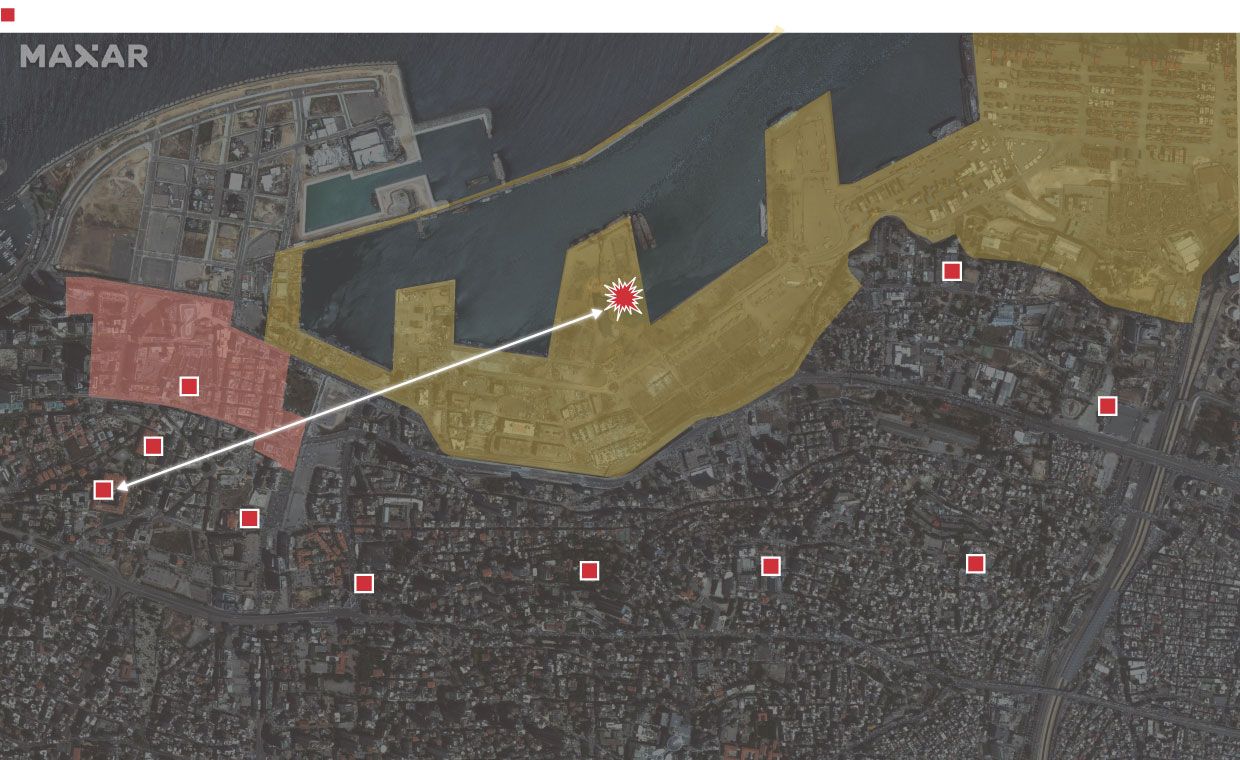 What caused the explosion in Beirut?

Authorities say the blast occurred when a fire at a warehouse—Hangar 12—on the city’s waterfront ignited a cache of ammonium nitrate, an explosive material that had been stored at the site for more than six years.

What is ammonium nitrate?

Ammonium nitrate is a chemical compound most commonly used in fertilizers. It is also used to make explosives and was used in the Oklahoma City bombing in 1995. 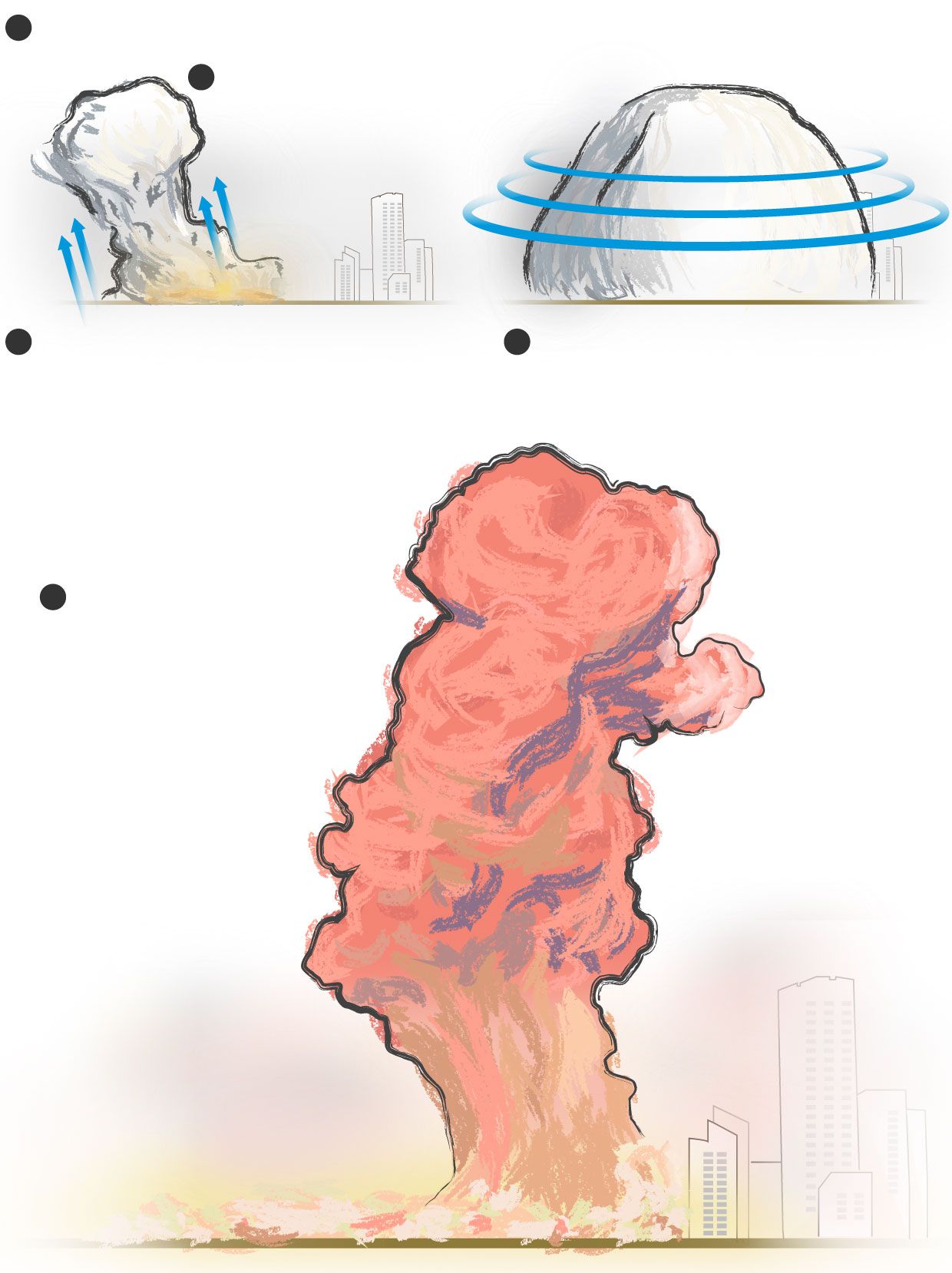 A fire breaks out at a port warehouse storing ammonium nitrate.

A first explosion sends a towering plume of smoke into the air.

A second explosion triggers a ball of fire. The fireball rises, pulling air, water vapor and debris into the mushroom stem.

A white, dome-shaped shockwave shatters windows and damages buildings as it sweeps through the city.

The cloud billowing over Beirut is brown and red, the color of nitrogen dioxide released when the ammonium nitrate exploded.

The Lebanese government is now facing questions about why the explosive chemicals were stored at the port.

Lebanese authorities say the explosives originally entered Beirut’s port on board a ship bound for Georgia in 2013. Shiparrested.com, a shipping industry newsletter, said in 2015 said that the vessel, which was carrying 2,750 tons of ammonium nitrate, was forced to dock in 2013 in Beirut due to technical problems. Its owners later abandoned it there. Local authorities transferred the explosives to a warehouse in the port and were meant to dispose of them safely, according to the newsletter, but they never did.

Officials at the port were placed under house arrest as investigators continued their inquiry.

What is the situation in Lebanon right now?

Lebanon’s already fragile economy has deteriorated rapidly amid lockdowns imposed to halt the spread of the coronavirus. The value of the country’s currency has plummeted in recent months, and its overtaxed power system has plunged the capital of Beirut into darkness for hours at a time. The economy is expected to contract by 12% this year, according to the International Monetary Fund.

Lebanese authorities are now racing to search for victims trapped under the rubble, but are grappling with a shortage of the necessary equipment to find and free anyone still alive. A number of foreign countries are rushing aid to the tiny Mediterranean country.A catastrophic explosion cut a path of destruction through Beirut on August 4, devastating the capital of a country already struggling with economic and political crises. AGENCE FRANCE-PRESSE/GETTY IMAGES

How has the coronavirus pandemic affected the country?

Lebanon’s health-care system has been strained by a rising number of coronavirus cases. On Tuesday, 177 new cases were reported. Many of Beirut’s hospitals were quickly overwhelmed after the blast, owing to the country’s poor infrastructure and the already strained resources that were devoted to combating the coronavirus. On Thursday, health officials expressed concern that the chaos surrounding the blast, including the rush of wounded to overstretched hospitals, may accelerate the spread of the virus. They plan to set up field hospitals dedicated to Covid-19 patients.

How have Lebanese people responded to the explosion amid economic and political crises?

Large protests erupted in Lebanon in 2019 denouncing government corruption and mismanagement. Protesters took to the streets again in April as the coronavirus and financial crisis heaped economic pressure on ordinary Lebanese people. Protesters attacked bank buildings as they vented frustration at soaring prices of food and other goods and what many Lebanese see as a sclerotic political system unwilling to fix the country’s problems.

Critics of the Lebanese government are now asking how and why the fire and resulting explosion took place. Demands for accountability are likely to grow more intense as Beirut emerges from the immediate aftermath of the blast.

On Wednesday evening, protesters in central Beirut attacked the convoy of former Prime Minister Saad Hariri, whose family has been central to the country’s political life for decades.

The Mark of the beast by Reno Omokri